There are pros and cons to both, but ultimately there is no “right” decision. It really depends on your genre, level of involvement you want, and a whole mess of luck.

What is Kindle Unlimited (KU)?

This is awesome if you are a big reader. Since many romance readers are voracious, there is a great market for romance. (Also LitRPG is big here too)

Authors are paid by how many pages are read. This is traditionally around .05 cents a page (half a cent). At 250 words a page, that means a 50K novel read from cover to cover nets an author about a dollar. This money is paid out of a monthly “pot” that fluctuates in amount.

Any author that wants to be part of this program must be Amazon exclusive. They cannot sell their books on any other sellers. (E-book only. Print is different) Their book will be part of the KU program and be available for sale on Amazon only.

Authors can join KU for 90 day contracts. You cannot get out early.

Going wide is when an author sells their book on multiple sites. Amazon, Barnes and Noble, iTunes, GooglePlay, and Kobo are the big book sellers. Authors sell their books on all these (and more).

Pros of being Wide

Cons of being Wide

So, how does an author choose?

If you are brand new, I recommend KU. It's easier and you will get more readers willing to take a chance on a new author in KU. It simplifies marketing and it gets your foot in the door.

If you're not brand new, this gets trickier. You have to look at your numbers. Are page reads a huge part of your income or are sales? Are you willing to do more work? What does your audience expect? (For example, the only website that sold stepbrother romances was Amazon. The other retailers wouldn't sell them, so being wide with a stepbrother romance isn't a good idea.)

It really comes down to whether you will make more money selling to multiple websites or if you'll make more with page reads.

There are many authors that do the first 90 days of their book launch in Amazon KU, then at the end of their term, go wide.

There are authors that launch wide and then go to KU when sales have slowed down on other retailers.

It's a tough choice. Luckily, it's just a 90 day one. Experiment. Find your market. Then roll with the punches to keep your books where you want them. 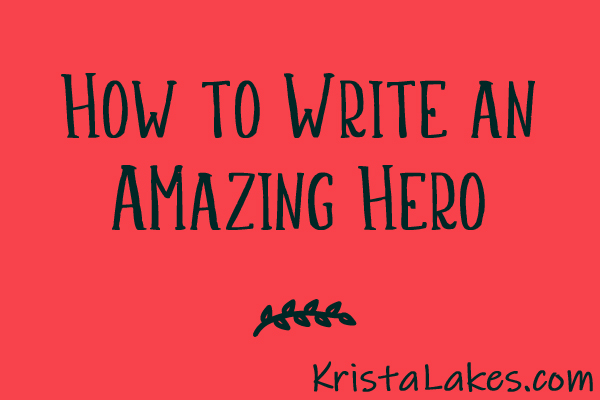 I need a hero!

Since the reader will see themselves as the heroine, you have to make the hero someone the reader wants to be with.

The hero should always be inwardly attractive. It helps if he's outwardly attractive too, but it's possible to have a scarred, deformed hero that we still love. (Jane Eyre for example, or even the Beast in Beauty and the Beast.) He doesn't have to be handsome on the outside, but he does have to have a heart of gold.

Most women still say the tall, dark, and handsome look is preferred. Taller tends to be more attractive.

Hair, skin color, race, eye color, and builds can vary. They need to take care of themselves, though. They don't have to be Mr. Universe, but they shouldn't be Homer Simpson either.

There is definitely a wish fulfillment aspect here. We want to be with the hot guy. We want to have the prince. So give your reader that if you can.

Your hero must be intelligent. Since this is a book, we only get a description of the physical but we get a play by play of what he says. He needs to have a brain or your reader will lose interest. If he's just a pretty face, why would our heroine (us) want to be with him? We'll be bored since we don't actually get to see those rippling muscles.

Intelligence, humor, and kindness will win the hearts of your readers.

The hero can be dark and brooding. He can be locked away inside himself with his emotions, or a bad boy with a dangerous past. He can be an assassin, a gangster, a soldier, a doctor, or a gigolo.

But he must be intelligent and have a good heart. Why would we fall in love with him if he didn't? 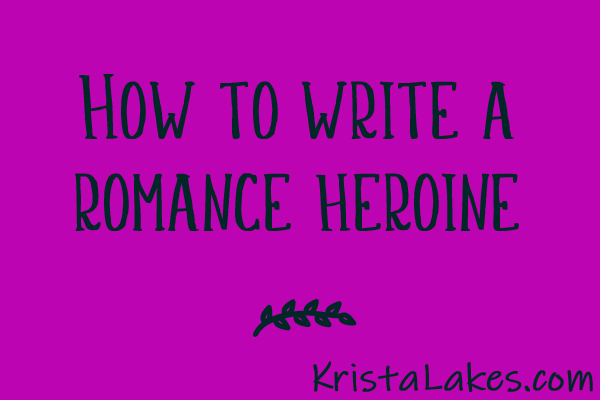 Not the drug, but the person.

(There are of course exceptions to this rule. There are always exceptions.)

We want to live another life. That's why we read fiction. It gives us a chance to fall in love with different people and live lives that we could never have. I will never be a 16th century courtesan, but I can read it and give my brain the sensation that I am. I'd love to fall in love with a handsome billionaire, but my husband would miss me.

That's why I read instead. I get all the thrill, but none of the work.

As such, make your heroine someone that your reader will want to be. Make them funny or sweet. Make their life more exciting. They can have danger and drama without the risks. They should never be boring or rude. We have to like them, even if we don't agree with their decisions.

You can have a strong heroine. She can be brass. She can be ditzy or even a little self-centered, but we have to like her. We need to see something redeemable inside of her. Romance readers want the happily ever after (that's why we read romance and not other genres) so she needs to be capable of not only having that good ending, but deserving it.

Your heroine may not be everyone's cup of tea, but she should always be kind. She needs to be someone you want to spend the next week with (as a writer and a reader.) I'm a shy introvert, so I don't always see myself as the bold, uber-friendly heroines. However, I would LOVE to be their friend. I can get behind a heroine that could be my best friend.

Your heroine can make mistakes. She should make mistakes. If Elizabeth Bennet wasn't prejudiced, we wouldn't have a story. But, the important part is that even though Elizabeth has all the wrong ideas about Darcy, we still like her. We understand why she's sure that Darcy is a prideful snot, and we can see a bit of ourselves behaving that way too.

Keep this in mind while writing your character. The heroine is your reader. No one wants to think of themselves as rude or unkind. We all want to be Cinderella with animals that come rescue us because we are so damn awesome. She shouldn't be perfect, but she should be someone we want to be. Someone we would want to be friends with.

The main point here is that the heroine should be likable. We should want her to succeed. We need to feel that she deserves this chance at happiness.

As you write your heroine, make sure that she's always someone you'd want to have around. Even when she's sad and mopey because she's lost the love or her life, we should want to bring her ice cream. We can want to smack her upside the head, but we should want to do it because we love her and want what's best for her.

Not because she's annoying the crap out of us. 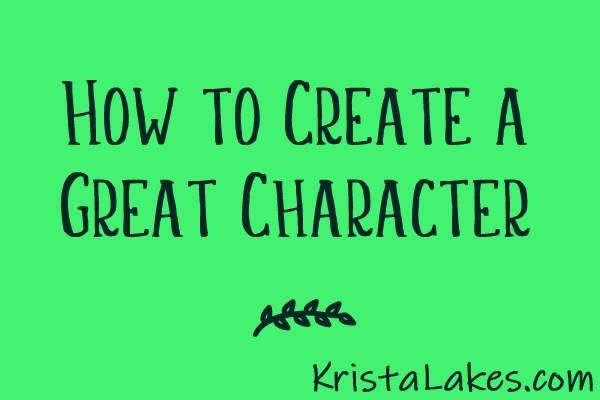 Characters are what make the story. You have to have good characters or the story won't matter. We need to care about these people and what happens to them. I would bet your favorite movie has interesting characters that grow and change through the story.

Boring people don't sell books. We all know too many boring people in real life. We want a chance to escape into a more interesting world for a while. That's why billionaires, princes, aliens, shifters, pirates, historical, and motorcycle clubs are all popular genres. We want something new and original in our lives.

The best part is that you don't have to come up with a brand new character all on your own. You already have hundreds of them in your head.

You can have a Mary Sue (someone with no real characteristics) as a main character, but only for self insertion. Think of Twilight- most people don't really love Bella, but we can easily insert ourselves into her head. She's a blank character. If we were reading this from someone other than Bella or Edward's point of view, we wouldn't see why Edward is so enamored with this very normal/boring girl. She could use a little more humor. Or a hobby. Or something that makes her stand out more than just she smells really delicious. We can't love her based on looks/scent/can't read her thoughts alone. We need to like HER. Not her attributes.

Let's create a character for a book. Let's call him Joe.

Do we actually like Joe? Would you talk to him at a party? Would you set him up on a blind date with your sister? What kind of date would they go on?

We need more. He can be handsome. He can be smart, but we need to show that intelligence, not just say it. Instead of “Joe was smart” we need to say “Joe sped through his advanced physics homework. He didn't even need a calculator.” We should also clarify if he's book smart or street smart.

Then we need a flaw. It doesn't have to be something terrible, but something that trips them up. For Aladdin, he is a street rat with too much confidence. For Thor, he's not all that bright sometimes. Loki is self-centered and a trickster. Edward Cullen likes blood. Mr. Darcy has way too much pride.

These flaws make the story much easier. Why can't Mr. Darcy find love? He's got too much pride.

It makes the character relate-able. If the character is too perfect, we can't put ourselves in their shoes. We don't care about them. The Stepford Wives are only interesting as plot devices, not as characters.

Your hero and your heroine both need a flaw. If their flaws clash, even better. Your hero has too much pride? Your heroine having some prejudice against prideful people is great. We have drama.

In creating characters, use what you know. Is there a friend that you adore? Can't stand? Why do you feel that way? Take them and make them a character.

Same with TV shows. Do you LOVE Dr. McSteamy? Why? What makes him real to you? He's kind of an ass, but there's something charming about him. Use that.

There are so many amazing characters out there. Use literature (Pride and Predjudice), TV (Grey's Anatomy), Movies (Disney Princesses) and make them your own. Make Disney's Mulan meet Mr. Darcy, but they're on an alien spaceship. Maybe Arya Stark should have a meeting with Marvel's Loki, but they're both high powered business lawyers.