Whew…. This fall is going by so fast! There has been a lot on my plate the past few weeks, and I am finally getting to the end of it… but that means I'll be going back for seconds soon!

First, a big thank you to everyone who has purchased and reviewed Champagne Kisses. After Amazon's little stunt of not giving it rank, I was really worried about it. I can't thank everyone who supported it enough. Thank you.

Second, I need to apologize for the delay on Freshwater Kisses. I had planned to get it out on Oct. 19th, but then my husband got sick. There is nothing like taking care of a grown man puking his guts out while a little boy looks on with disgust. Needless to say, I didn't get much done this past weekend and am now really glad everyone is feeling better. I am going to get it out as soon as possible!

Fourth,  I am re-releasing “Fire Always Burns”. It's new title is Burned, and it has a new cover, new edits, and new stuff! (That's been keeping me busy too!)

Fifth (I told you there was a lot going on!) ,Saltwater Kisses has been translated into German! (Link coming soon) I am just fixing up the cover (Holy Cow are German words long!) but I am super excited to see it in another language 😀

Sixth, another Boxed Set! A friend of my mine calls the sets “author sample packs”. This one is all about Billionaires! My addition is “Woman of the Billionaire's Dreams”. There will be a volume 2 coming out in a couple of weeks, so pick that one up too! 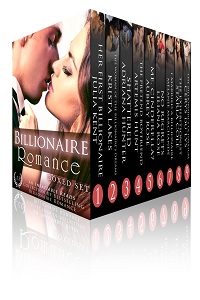 And lastly, PRIZES!!!! There are two rafflecopters going on with some awesome prizes. Check them out! (all you have to do is click “like” on Facebook to enter!)
1.  a Rafflecopter giveaway (Indie Bookworm Pub: 5 $10 gift cards!

Whew…. It's been a busy week. Now time to go focus on Robbie and Sam and get their edits done!