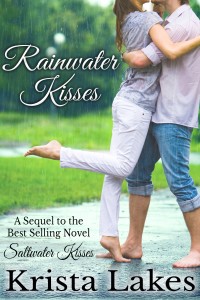 The older sister of Emma LaRue wasn’t looking for love. In fact, the last thing Kaylee LaRue thought as she attended her sister’s Caribbean wedding was that she would meet a man as confident as Owen Parker. The suave businessman oozed charm, and when that charm was directed at Kaylee, it gave her pause. She couldn’t be sure if the man was actually interested in her or just interested in a good time.

In reality, Owen Parker had never met anyone like Kaylee LaRue. The quiet girl from Iowa made him forget to breathe the first time he saw her. When he tried to work his magic, her wit proved to be a match for his, and his charms had no effect. He knew what it looked like- she probably thought that he wanted to have a vacation tryst with her just as Jack Saunders had with Emma. Nothing could be farther from the truth.

Kaylee tried hard not to yield to his advances, but their last night in the Caribbean was simply magical. After a passionate night spent in the arms of Owen, Kaylee ruefully observed that there was no fake wedding to keep the two of them together. As she flew home, she thought it’d be back to the same old life for her. She never expected Owen to show up at her door.

However, this small town girl wasn’t sure she was ready to change for this city boy. When Kaylee tried to fit into Owen’s world, everything came crashing down. In the blink of an eye, what seemed like a strong foundation suddenly found itself built on a pillar of sand. Would their relationship blossom like Jack and Emma’s, or would the two of them forever be haunted by the memories of rainwater kisses?

A never before seen excerpt:

“You want to take a walk around the park?” Owen asked when we returned to the hotel. I glanced up at the darkening sky, then out towards the trees. Green sprouts were just starting to form on the bare branches, waiting for the spring rains to nourish them. The sky was dark, but it still looked like we had some time before the rain would hit.

“Sure,” I answered. Owen grinned and grabbed my hand and the two of us practically skipped hand in hand into the park. We found a path that meandered through the trees, the two of us just quietly walking together. From the corner of my eye I could see his bodyguard shadowing us silently. I ignored him, instead just focusing on being with Owen. I loved the way his hand felt in mine: strong and warm, protective and secure. I loved the way he smelled and the way he wrapped me up in his arms. Just thinking about it made me squeeze his hand a little tighter, glad just to be with him.

A hotdog stand stood off the path, a bright yellow umbrella over a light brown cart. The smell of cooking meat wafted through the air, and even though we had just finished a satisfying gourmet meal, my stomach rumbled. Owen gave me a surprised look at how loud my stomach growled.

“Maybe a little. I didn't eat much today, so even though the food was amazing, the serving size was a little small,” I said sheepishly. Owen squeezed my hand.

“I can go for a snack myself. I've never eaten there, but it is supposed to be the fanciest place in town, so I thought I should take you. You deserve the best.”

A flood of warm fuzzies flowed through me at his words. He not only loved me, he really liked me too.

“Can I buy you a hotdog?” I asked as Owen's stomach growled as loud as mine had a moment earlier.

“You don't have to buy me a hotdog. I'll get it. I don't know if you know this, but I'm kind of rich,” he whispered theatrically in my ear as we approached the small stand. I gave him a playful push, pulling out some money from inside my dress. Owen raised his eyebrow as he looked down the top of my dress to where I had put my ID and a little money.

“I know, but you bought dinner. Let me get the hotdogs.”

“Like I can say no to you anyway,” he said, shaking his head with a good-natured laugh.

I paid the man for two hotdogs, and together we ate them as we walked through the park. Owen pretended to bump into me as we walked, and I would bump back into him, both of us laughing under our breath as we tried to keep the illusion that it was always an accident.

Thunder rumbled and Owen turned us back towards the hotel. The clouds overhead were starting to get darker and more angry looking by the minute. I wasn't sure just how much longer they were going to hold back before letting loose.

We had just passed by the hotdog stand again when a crack of thunder made me jump. Owen laughed and pulled me close to him, draping his arm around my shoulder. I smiled up at him and felt something wet land on my cheek. I touched it with my fingertips, confused for a moment until a second heavy drop landed square on my nose. Owen and I looked right at one another with realization that it was raining just as the down pour started.

It was as if someone had turned on the shower faucet, the rain starting quicker than either of us could have expected. We ran for the nearest trees, but their bare branches offered no protection from the sudden deluge. I shivered, the two of us already completely soaked by the sudden microburst. Owen quickly shrugged out of his jacket and wrapped it around my shoulders, the satin inside still warm from his body.

I reached up, wrapping my hand around the back of his neck and pulling him down for a kiss. Our lips met, the taste of the rain on his lips. I opened my mouth and slipped my tongue inside of his, his mouth warm and inviting. His hand tangled itself in my wet hair and pushing me further into him. Our bodies pressed together, the heat of his chest defying the cold of the rain.

We stood there, kissing in the rain as if it was the most natural thing in the world. Raindrops pounded against the pavement, splattering against windows and shaking the baby leaves on the trees. I couldn't stop kissing him, enjoying the taste of rainwater kisses to much to stop.

To enter, leave a comment in the comment section of this blog post with a valid email address. Winners will be selected and notified within two days of the end of the blog hop.